Lone workers – your health and safety

You’re a lone worker if you work by yourself without close or direct supervision.

The facts about workplace injuries and ill-health

Latest available HSE workplace injury figures are for 2018-19. In that year, 147 workers died at work (up from 144 in 2017-18), of which over a quarter were falls from a height. As for non-fatal injuries, there are two sources of information. The Reporting of Injuries, Diseases and Dangerous Occurrences Regulations 2013 (RIDDOR) is a self-reporting system which logged 69,208 injuries in 2018-19 (down from 71,062 injuries in 2017-18). But the broader measure is the Labour Force Survey, which showed 581,000 injuries during the year (up from 555,000 in 2017-18). Of non-fatal injuries, some 37% were slips, trips and falls (whether on the same level or falls from a height). Handling, lifting and carrying accounted for 20%, while acts of violence caused 8% of these injuries. Together, non-fatal workplace injuries caused the loss of an estimated 4.7 million working days across 2018-19.

The effects of ill health are even more striking. Figures show 1.4 million working people suffering from a work-related illness in 2018-19. Of these, just under half a million were new diagnoses. Stress, anxiety or depression accounted for 44% of the total, with musculoskeletal disorders accounting for a further 37%. As a result, an estimated 23.5 million working days were lost due to work-related ill-health during the year.

What your employer must do

Your employer has specific duties to protect you as a lone worker. This also applies if you’re working for them as a contractor, a freelancer or are self-employed.

It is estimated that up to 8 million people in the United Kingdom are lone workers. That’s 22% of the UK working population.

Lone working is defined by the Health and Safety Executive as those who work by themselves without close or direct supervision. This doesn’t mean that the worker is physically alone, it means they are in a separate location to the rest of their team or manager. Some workers may be alone such as fixed location workers, however, many work with the general public.

Statistics from the British Crime Survey have indicated that as many as 150 lone workers are attacked every day. The victims of attacks are varied and take place across a number of industries and job roles where people can be found working alone. This statistic includes both physical and verbal attacks.

With as many as 46% of the UK workforce in full-time employment counting themselves as lone workers, the number of workers at risk every day is clear. 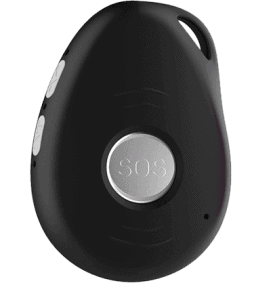 Providing personal safety devices is one of the most effective ways of protecting lone workers and is the first choice for many employers.

The lone worker alarm uses GSM as its means of sending SMS messages, including two-way voice from and  to programed mobiles. GPS is used for tracking the user’s location linked via Google Maps.

The device has a one button SOS, serious fall detection/man down, Geofence, over speed alert, motion/no motion detection and much more.